News of New Albany’s “Peaceful March for Solidarity” first came to us as an attachment to a blank text message from an unknown number with a Los Angeles area code. The attached photo — a digital flyer from “The Board of Solidarity March in Union County” — invited us to a Sunday afternoon event featuring music, speakers, marching, and prayer.

At first, I suspected a scam. Why would this message come from an area code in California? Who were the people behind this “Board of Solidarity?” While the start and end points of the march were uniquely local (the park by the river, the courthouse), these are also two locations popularized on TripAdvisor. What if outsiders were promoting fake events as a way to stir up tension in small southern towns? (This kind of thing has happened before.)

And, to be more honest than I should be, I also thought to myself: “Is this the kind of event I’d expect to see in New Albany?”

Sentiments are rarely as cut and dried as we like to think, and stereotypes should never be confused with truth.

But New Albany’s truth is far more complex. Some our citizens are racist; others are working hard to improve the lives of the Black and Immigrant communities here. Some are in pick-up trucks; some refuel their sleek electric cars at the charging station downtown. Some collect guns; some advocate for gun control. Some revere the confederate flag; others want it banned. And while some of my fellow New Albanians support Mr. Trump no matter what, we also know both Republicans and Democrats here who plan to vote for Biden in 2020.

In this, there is an lesson: sentiments are rarely as cut-and-dried as we’d like to believe, and stereotypes should never be confused with truth.

But … back to our anonymous invitation. After googling around provided no useful results, we reluctantly turned to Facebook for more information. On the one hand, we did find the flyer in circulation there; on the other, we considered that Facebook might be yet another venue for spreading the scam.

With time, though, it became clear the the invitation was authentic. (Our mysterious text message, it turned out, came from a local who returned here after living in California.) This left us with only one decision to make: to march … or not?

I’m relieved that my first inclination was to attend the march. I do believe America has deeply rooted, systemic prejudices against people of color. I’ve watched the brutality of the past few weeks with horror, disgust, and alarm. I do believe that black lives matter.

But I would be lying if I didn’t admit wondering how a protest march would be managed by local police … or whether the presence of peaceful protestors might move some our county’s most racist citizens to violence.

It occurred to me, though, that Black Americans face these tensions — the threat of police brutality and the possibility of racist violence — every day. Despite our uncertainties, we knew we really had no choice at all. We had to march.

By the time we arrived at the park along the river, a a large crowd (Clyde estimates around 250 people or more) had already assembled under the shade trees. Local police — in standard uniforms, not riot gear — were present, and, instead of striking intimidating poses or making shows of force, they were being helpful: directing traffic and arranging bright orange cones to block off the streets for marchers. (In other words: the New Albany police were doing exactly what the police should be doing in every town where peaceful protests are taking place.)

The crowd kept growing. A woman squealed with delight when she recognized friends; she danced over to them with her arms in the air, then gave each one of them a bear hug. Lanky teens in t-shirts and distressed jeans stood in tight clusters, their arms folded casually over their chests, laughing at private jokes and tapping their feet to the amplified music. Some volunteers handed out chilled water bottles to combat the oppressive heat; others signed people up to vote.

We saw familiar faces, too: folks from church, one of our pastors, and an always-inspiring local icon (in her eighties, braving exposure to the crowd and heat near ninety degrees) who said she wouldn’t have missed the march for the world.

There were also stark reminders of the harsh realities the world is facing. Roughly half the crowd wore t-shirts emblazoned with slogans: Black Lives Matter, I Can’t Breathe, We Shall Overcome. A twenty-something woman staggered past us, offering people handmade protest signage from a huge stack of posters in her overloaded arms. (Until that moment, it had never occurred to me that protest marchers don’t always make their own signs.)

And then, of course, there were the masks. By my count, about twenty percent of the crowd wore bandanas or surgical masks; of these, far too many people wore their protection below their noses or under their chins, rending it useless. Not far from where we stood, I watched a young man pull down his mask to chug water; he never replaced it.

On level after level, our government fails to protect its single most precious asset: its people.”

It struck me that the slogans and masks were harbingers of the same dark truth: we live in a world where, time and again, on level after level, our government fails to protect its single most precious asset: its people.

By the time the event began, Clyde estimated that about a thousand people — about one in seven of New Albany’s residents — had filled the park. The first speakers acknowledged the crowd and our reason for being there. Pastor Michael McField delivered an impassioned speech. Mary Beth Muncie, the choir director from our church, addressed the crowd, her voice breaking with emotion. Willie Brewster, a young man raised in New Albany and now living elsewhere, shared brutally honest remarks about his life as a black man. Music from local artists and the occasional prayers punctuated these presentations, and the atmosphere shifted, feeling less like a carnival and more like a religious service.

Eventually, the time came to march. Young men with bullhorns announced the text of the first chant. The crowd surged toward the street; people held signs aloft. Residents of downtown apartments came out on their balconies to watch us pass. I was proud that one of those residents — the eighty-year-old icon I mentioned earlier — had left behind the comfort of her balcony to immerse herself in the moment.

Our walk from the park along the river to the courthouse took about nine minutes — roughly the time it took for George Floyd to die at the hands of the Minneapolis police.

At the courthouse, we stood in the full glare of the afternoon sun. But despite the oppressive heat, the crowd lingered for a speech, a poem, a prayer, eight minutes and forty-six seconds of silence, a song. We sang “We Shall Overcome,” and it struck me as deeply, terribly sad that Black Americans have been singing that song for more than half a century. What tremendous faith it must take to believe, deep in one’s heart, after decades of injustice, that deliverance is still coming “some day.”

What tremendous faith it must take to believe, deep in one’s heart, after decades of injustice, that deliverance is still coming “some day.”

Clyde and I were humbled to participate in the march … and so proud to see so many in our new hometown participating alongside us. Here’s hoping we can carry the energy and intention of this moment into meaningful actions in the difficult days to come. 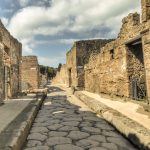 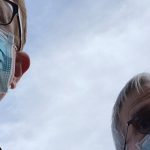 Masked in the South

Masked in the South