Mark’s Note (April 2020): Back in 2011, we took a gourmet working tour of Brussels with Global Enterprises. Nine years later (as of this writing) they’re still offering the same tour, and all of the restaurants and shops we visited are still in business! That says a lot for the tour organizers and the quality of the destinations. If you’re in Brussels, take this tour your first night.

The sun was sinking rapidly behind the ornate facades of the buildings surrounding Grande-Place, the main square in Brussels. A chilly breeze kicked up leaflets for a local band. As time passed, we started to wonder if we’d booked the right tour on the right day, but about the time we voiced our concerns, our intrepid guide, Marc, appeared. Having conducted two tours earlier — a chocolate breakfast tour and an afternoon beer sampling — Mark was a jolly soul by the time our dinner odyssey began! But this was fine — especially once our sweet friend J. yanked his chain a bit for dropping one too many expletives during our orientation. 🙂

We started off with a stop at Elisabeth, a boutique chocolatier just footsteps away from the Grand Place. While the American tourists were packing the Godiva store (but why, when they can get Godiva chocolates — more cheaply! — in the States?), we sampled exquisite tangerine truffles dusted with bitter cocoa. Yum!

From there, we paid a visit to the quirky Le Roy d’Espagne, a bar that claims to have been in continuous operation since the late 1600’s. (This is a point of some dispute.). The joint serves pretty much every beer you can think of, offering samples of a local blueberry-flavored beer (“for the ladies,” our guide insisted) and a bold, rich, hearty ale (“The Unlucky Blonde”) for the gentlemen.

The crown jewel of the tour? Dinner at Le Chat Noir (Vrildagmarkt 34, Ghent 9000, just .2 miles from St. Bavo’s Cathedral). Things got off to a great start with the Brussels Mussels, exquisite seafood served in bucket of celery-based broth. I’ve never had better mussels … and I can’t recall ever seeing diners digging in the mussel bucket with hunks of bread, trying to sop up every last drop of broth — but we did!

That done, we tucked into the chicons au gratin — Belgian endives wrapped in ham and baked in cheese. (Hey, ya gotta eat your vegetables!)

Alongside this: the “filet Americain” — or steak tartare. This was my first experience eating steak tartare: big, round, thick, fat patties of ground steak, just as red and chilly as you might imagine, resting on a bed of verdant greens. My first bite was hesitant, I admit. But the meat was well seasoned with a hint of onion, and the soft texture was surprisingly velvety on the tongue. I ended up eating my portion … and then some.

Then, carbonnade beef: a delicious, slow-cooked, meaty dish in a thick, savory sauce. It turned out to be everyone’s favorite entree of the night — and once again, everyone was dipping bread in the pot and soaking up every ounce of stew.

From there, we strolled over to Mokafe Taverne in Les Galleries Saint Herbert for our first taste of Belgian waffles. Listen: I don’t care where you’ve had Belgian waffles in the States … nothing compares to the light, crisp, sweet confection sold here in Brussels. These waffles need nothing more than a light dusting of powdered sugar (okay, well, and some cafe au lait on the side) to perfect their flavor. Amazing.

We did other things on our first day — shopping, strolling, nosing around the Grand Place, sampling chocolates — but the culinary tour was definitely the highlight, in no small part due to the friendly, laid-back personality of Marc (who, as it turns out, not only owns the tour company we worked with, but a lovely house in Nepal, to boot). 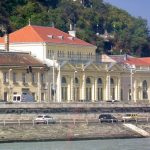 You Can Do It – Rudas Baths, Budapest