When people ask, “Where’s New Albany?”, the usual answers locate the city relative to other places.

New Albany, a sawmill and grist mill town founded on the banks of the Little Tallahatchie River in 1840, lies near the northern border of Mississippi. Today the more important rivers in “the fair and friendly city” are, by far, the asphalt ones. Highway 15 runs down from Brownfield (a town with forty folks and two churches, near the Tennessee state line) before it brushes past the eastern edge of town, continuing on to Jay’s Wrecker Service down south in Beaumont. Highway 30 runs in from Oxford (in the west), gets muddled into local roads as it passes through town, then re-emerges and heads east, dead-ending into the two-lane, 444 mile-long national park known as the Natchez Trace.

A colleague from Atlanta, hearing of our move to New Albany, said, “I know that place! I pass through there all the time when we drive from Birmingham to Memphis on I-22!” In truth, if you stay on the Interstate, you’ll mainly see Love’s Travel Stop, a Chevy dealership, and the less interesting side of the BNA SportsPlex, followed by a cluster of fast food joints (KFC, Burger King, Taco Bell, and Houses both Waffle and Huddle) at the exit nearest the Walmart. You won’t see much of the New Albany I’m falling in love with.

If any stretch of pavement captures the soul of New Albany, it’s Bankhead Street, the main street in town. (Main Street, which runs parallel to Bankhead, is not, at least not any longer, the main street.) Bankhead Street gives me joy. You approach it by crossing the Little Tallahatchie via an expansive, lamppost-studded concrete bridge wide enough to accommodate about eighty lanes of traffic. (Okay, maybe four lanes, with two emergency lanes on either side. But it feels bigger.)

Bankhead Street, unlike the main streets in so many small towns, remains vibrant. (I’m told it faded for a bit, then made a comeback.) During the day, especially on weekends, people roam the broad sidewalks, popping in and out of shops. The parking spaces (no meters!) are more than adequate; even so, locals have a peculiar habit of parking single-file down the middle of the street. (“They’ve tried to stop this,” I’m told, “but people just like doing it.”) At night, the roof lines of the stores and shops twinkle with tiny white lights … the parking places are full again (but, at this hour, shoppers give way to diners), and the entrance to the Tanglefoot Trail, heralded by an archway, plays host to strolling couples and bicycle riders stopping for coffee.

If cruise ships sailed the Little Tallahatchie, vacationers would marvel at Bankhead Street, dubbing it an “untouristed paradise.”

I’ll take you shopping and dining later, so for now, I’ll just say this: on Bankhead Street, you can get dressed to the nines, indulge in the best coconut cakes and chocolate pies ever, bejewel yourself with diamonds, prowl for antiques, try chicken salad (made with grapes!) at an old-time soda fountain, eat more spaghetti than a human being should, dine on pecan-crusted salmon while sipping bourbon, get your spine adjusted, and browse locally-made soaps and bath oils. A block or so further up, you can get your banking done, see a live performance, listen to courthouse bells strike the hour, get your car tag in about five minutes (try that in Atlanta!), tour a thriving church built in 1927, and buy your sweetie a bouquet. Wander one street over, and you can get snow cones, order your hamburgers “floated,” and slurp down gumbo with a side of a local draft IPA.

If cruise ships sailed the Little Tallahatchie, vacationers would marvel at Bankhead Street, dubbing it an “untouristed paradise.” This is exactly the kind of walking/shopping/dining experience that big cities try to emulate, tossing up faux brick facades and renting out expensive square footage to transitory chain restaurants. Here in New Albany, though, Bankhead Street is the real deal: local shops, local people, local color. In a world where Walmart’s arrival sucked the life out many small downtowns, New Albany’s Bankhead street remains this city’s vibrant heart.

Many roads pass through here; Bankhead Street, though, is where any serious exploration of New Albany must begin. It is one of the first places I’ll take you when you visit, a slice of Southern Americana at its finest, and one of the many reasons to love this small Mississippi town we now call home. 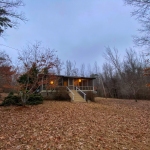