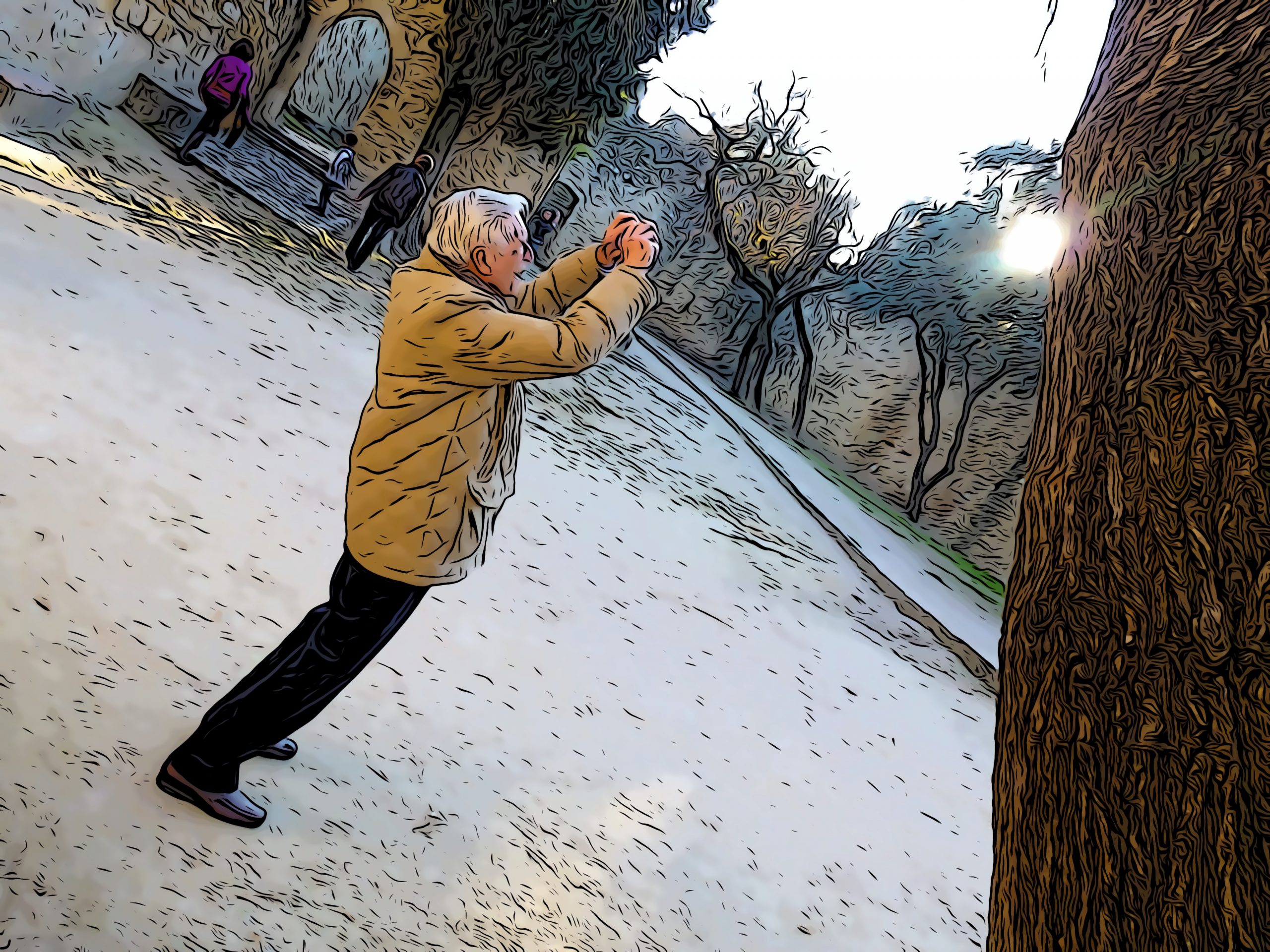 Might the chronological nature of the daily note hold a key to better recall?

An Exercise in Memory

My father-in-law, Joe Parks Jr., was a marvel. Well into his late eighties and early nineties, he walked several miles a day on his treadmill. He traveled unaccompanied at least once a year to Bangkok, Thailand, navigating with ease a city that bewilders most visitors.

When we would visit him there, we found he could very confidently recall how to get from an obscure market to a hidden palace to a specific SkyTrain stop to a local boat going up the Chao Praya River to the one temple he wanted to see. His spatial recall — his memory of how one place connected to another — surpassed that of much younger people, including me.

As he traveled through Bangkok — and, indeed, through Cambodia and Myanmar and Laos as well — Joe constantly had his phone in hand, shooting photos. On the bus, he shot awkwardly framed images of street vendors and fruit stands. On walks, he shot photos of flowers and hotels and fountains. He meticulously documented every street fair, festival, parade, concert, and event he encountered.

Back home in Mississippi, as he completed his daily 2-3 mile treadmill session, Joe would use an Apple TV to stream photo slideshows to a television in front of him. From a library of thousands of photos, he would choose a subset to review: Bangkok one day … Siem Reap the next … and Hanoi the day after that. He spent hours and hours and hours watching these photos (and photos of local events, holidays, and family events, as well) over and over and over again.

Joe remained in good health almost until the end — and even when cancer began to steal his breath, he retained his sharp memory. When he passed away, he left me a legacy of more than 75,000 photos: digital memories, chronologically sorted, documenting his passage from one place to the next.

The Role of Chronology in Memory

A UCLA study published in Nature in May 2022 finds that our memories are not forged in isolation; instead, significant memories are stored in clusters. The recall of one such memory fires off the recollection of others that are chronologically linked. In other words: when we remember one significant event, the very structure of memory dictates that we are more likely to remember other events that happened around the same time.

Reading the UCLA Health summary of this study got me to thinking about Joe, walking on his treadmill, day after day, reviewing his photos over and over again. Those photos, chronologically sorted, amounted to a breadcrumb trail though the significant events of his life. During his exercise sessions, Joe reviewed how one moment gave way to the next, strengthening the connections between one memory and another.

In retrospect, I believe that his daily review of chronologically-sorted memories (a journal, for all practical purposes, just composed of photos instead of words) was responsible for Joe’s uncanny ability to recall the events, places, people, and spaces he encountered in the course of his travels

The juxtaposition of these data points — my memories of Joe, his daily habit of reviewing chronologically-sorted photos, and the UCLA study — prompted me to think more deeply about a feature of the thought processors increasingly used these days for personal knowledge management: the daily note.

Most tools for thought (Obsidian, Logseq, Thunknotes, and Roam Research among them) present the user with a daily note: a blank sheet linked to a specific day — a simple but powerful tool for charting our personal chronology.

Different Uses of the Daily Note

I use the daily note as a journal. A template automatically populates the note with a series of prompts reminding me to record my weight, my morning and evening blood pressure, my success with exercise and meditation, and the events of the day. Some entries include the barest of details (“Ate a really good goulash at Urban Betyar near the Jewish Quarter in Budapest”); others capture richly detailed stories about the important events of my life.

Other people use the daily note as an interstitial journal. As they begin each daily task, they record the time and make a brief note (“Working on the Amberson presentation”). At the end of the day, they have a reasonably detailed accounting of how they invested their time.

(I am drawn to the idea of interstitial journaling, but confess that each time I’ve tried it, I consistently make one or two entries at the top of the page … and then forget, when switching tasks, to loop back and make new entries.)

Still others — including many people I admire and am influenced by, like Eleanor Konik — say they find little use for the daily note, preferring to work exclusively (or almost so) in atomic notes (short notes containing single ideas, linked back to their source) and Maps of Content.

The Daily Note as a Memory Aid

The UCLA finding, however — the idea that the brain likes to link memories together chronologically — has me rethinking the importance of the daily note purely because of its potential to reinforce chronological connections among the notes we make.

Might the chronological nature of the daily note work in tandem with our brains’ preferred method of encoding memories? And might a routine review of selected daily notes (a parallel to Joe’s slide shows) improve our recall of the ideas we encounter, notate, connect, organize, develop, and express?

Inspired by my memories of Joe and the UCLA study, I’ve come up with an experiment to test how smarter, more intentional use of the daily note will improve my perceived retention of the ideas I encounter.

Had Joe’s photos been of insufficient resolution — too blurry or indistinct to preserve detail — his daily review of them would have produced less value. With this in mind, I want to begin capturing daily notes with a level of detail sufficient for supporting my goal of higher retention.

While I’ve not been a disciplined interstitial journal keeper, I have been reasonably good about linking significant new notes back to the daily note. For example:

This practice, paired with my regular use of the daily note as a personal journal, allows my daily notes to become a reasonably detailed chronological record of the people, places, and ideas I encounter — a text equivalent, in Obsidian, of Joe’s photo stream.

In my conversations with the Queen of Thoughtful Journaling, Tracy Winchell, the question has arisen: “How often do you review old journal entries?”

In the past, I’ve said to Tracy, “I don’t worry too much about going back to read past entries. I think the mere act of keeping a journal alters the way we see ourselves and the world, whether we go back to read previous entries or not.”

I know this is true. But that said, today’s musings over the UCLA study and Joe’s exercise routine suggest that reviewing past entries may be just as important as capturing them.

Our Methods Make a Difference

In my own defense: I have always reviewed my daily notes … albeit haphazardly.

Prompted by dream about my best friend in high school, I’ll scour old journal entries about him. When Clyde and I find ourselves asking, “What was the city where we ate our first steak tartare?”, I plow through my photo library until I spy a snapshot of the dish. (We were in Brussels, by the way.) When I’m working on a post about how John Wesley reconciled allowing women to preach with Scriptures prohibiting the practice, I’ll search Obsidian for the cluster of notes relevant to that topic … and stumble on the daily note documenting the first time I came across a primary source.

As someone interested in brainstorming and divination, I also lean into review methods rooted in synchronicity. I like Obsidian’s “Random Note” plug in, which presents me with a note selected by processes outside my control. I like drawing two or three random notes and trying to discover (or impose) connections between them. I’ve even used randomly-selected notes to generate short fiction.

Consider, though, how these occasional or whimsical forays into past notes differ from Joe’s methodical pursuit of chronologically-sorted links to his past.

As he walked on his treadmill for an hour or two a day, Joe reviewed old photos in the order he took them. He did this every day, day after day, for years … and seemed better grounded in his memories and how they connected him to the world around him as a result.

What if, instead of reviews of my daily notes being subject to the whimsy of circumstance or serendipity, they were scheduled, structured, and deliberate? If so, they might work like this:

Our Purpose Makes a Difference

Those familiar with David Allen’s Getting Things Done framework or the structured “retro meetings” I facilitate for corporate colleagues will say, “There’s nothing new about scheduling weekly, monthly, or annual reviews.”

Those kinds of reviews, though, tend to be made with a goal of self-improvement in mind. They are undertaken with an eye toward gap analysis and future planning, for the express purpose of facilitating progress and growth.

By contrast, the purpose of this particular kind of daily note review is less about evaluation and more about reinforcement. We are reviewing a chronological record of what we encountered, recorded, learned, and produced simply as a way of reliving — and strengthening our recall of — our intellectual journey.

For the next month, I’m going to:

In doing so, I’m not so much asking, “What did I learn?” but “How did I learn?” This is less about personal growth … and more about an attempt to strengthen my own memory of the ideas I encounter and the connections I make between them.

Is this a scientific study? No, of course not! But as a personal experiment, I confess the idea intrigues me. (And I hope you’ll try it, too, at some point, and let me know what your own experience suggests.)

A Note of Gratitude to Joe

After Joe died, Clyde and I acquired and renovated his home … and now my writer’s studio occupies the exact spot where, day after day, Joe strode briskly along, watching a chronological record of his journey through life scroll by.

Sitting here this morning, I can still hear the whir of that motor and the sound of his footsteps on the treadmill’s belt: Joe, reviewing his memories, strengthening connections, and improving his life.

I’m grateful for his example … for today’s inspiration … and an opportunity to see where my own little exercise takes me over the course of the next month.